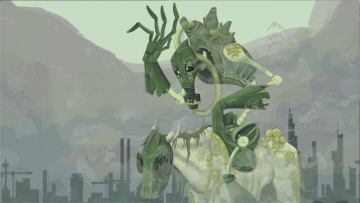 Each year the film and animation students of BCFE mark their efforts with a graduate showcase.  This year is different. Our students’ work will be showcased virtually via IFI@Home. This virtual programme highlights the inspirational work generated by BCFE students on the BA Hons Visual Media and the HNDs in Film, Game Design and Visual Effects.

The students this year faced the unexpected shutdowns with creativity and courage. This showcase includes a selection of short animation and live action films which exhibit a diverse, yet innovative, series of narrative structure and digital application.

The animated shorts reference by chance many issues associated with living in a Covid 19 Lockdown. Student themes across several genre have created narratives around a game-obsessed culture, where the fantastical that permeates urban humdrum is soberly balanced by the threat of climate injustice defence and survival. Themes and references are evidenced also against traditional rural and ethnic lifestyles and contemporary yet culturally diverse urban routines, presenting subjective terror and resilience in equal measure…

The live action shorts express a variety of themes: Identity, Loss, Writers Block, Beauty as Propaganda, Addiction, Conspiracy Theories, Childhood, and are expressed through a creative filmmaking approach to narrative and genre.

We hope you’ll join us in celebrating our students’ hard work and creativity by exploring our virtual showcase.

We would like to wish the graduating class of 2021 every success in their future endeavours.

The original promotional art is sourced from ‘The First Step’ 2020 and ‘Alienated’ 2021 collaborative Animated Film Shorts. See below for shots from these two Visual Media degree program animation shorts.