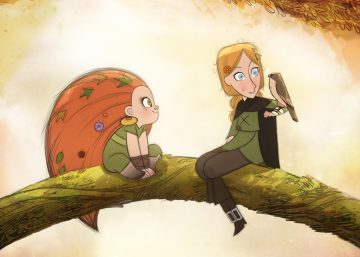 Tomm Moore (pictured below), co-founder of Cartoon Saloon and alumni of Ballyfermot College of Further Education’s Irish School of Animation, returns to his alma mater to offer current students insights into his personal journey from student to professional artist, animator, and storyteller. In fact, Tomm has worn many hats at Cartoon Saloon, including Director, Art Director, Storyboarder, Animator, and Illustrator. Tomm will show examples of work up to and including the studio’s most recent release, ‘WolfWalkers’, followed by a short Q&A session. Join us on a journey of discovery and an exclusive glimpse into the art, process, struggles, and success encountered by Tomm and his team along the way to becoming the internationally recognised, award-winning, uniquely Irish animation studio (with 3 Oscar nominations to date). If you liked Tomm’s lecture, have a look at this new lunchtime series from Cartoon Saloon, Animation Skillnet, and The Butler Gallery, taking place between January 20th and March 3rd.