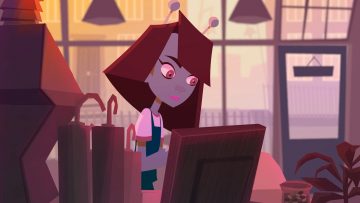 7 Animation, Graphics and Illustration graduates to exhibit at Art Source

This year, 7 graduates from Animation, Graphics and Illustration will be exhibiting at Art Source at the RDS (Nov 12th – 14th).  We’ve included bios and associated images for some of the students below.

Caoimhe Hennessy is an artist and illustrator from Dublin. Growing up in a family of musicians, Caoimhe found her love for all areas of the arts including drawing, painting and creating as well as singing, dancing and performing on stage. Her love of storytelling and characters is clear in her work that is bursting with colour and excitement. Although Caoimhe works with many different mediums she mainly uses digital art when creating her illustrations. After graduating from BCFE with a HND in Illustration in 2020, she illustrated her first children’s book “The Mindful Walk” written by Harriet Beth Carr. The success of that book has led to multiple commissions and projects with other authors and Irish organisations and businesses. Caoimhe hopes to work on more children’s books in the future and dreams of writing and illustrating her own stories.

Chiara Tallarini is an Italian illustrator and graphic designer currently living in Sligo. After completing a HND in Visual Communication from Ballyfermot College, she was selected for the ICAD Upstart Program in 2019. She likes bringing a sense of humor to her work and her illustrations can be defined as playful, colorful, and fun. She loves coffee, books, and the ocean. Instagram handle: @smelltheflowerswhileyoucan

“In a tiny cafe in Dublin, a hardworking Alien barista is faced with more than an order, as she hustles to make coffees for two overly nosey customers. This is the synopsis of the award-winning short film Alienated, made by two BCFE animation graduates.

Robyn Coleman and Dayna Crossan made “Alienated” as a final year film together, to showcase their artistic abilities as a team. As great friends and fellow classmates, they collaborated on almost every aspect to bring the story to life. They both hope to pursue a career in the animation field, specialising in design and storyboards respectively.”

Carla Marni is an Argentinean multidisciplinary artist and designer based in Dublin. She is an illustrator, pattern creator, textile designer and keen motion graphics designer. With a background in textile design, Carla graduated from Ballyfermot College for further Education with a HND in Illustration in 2020 and she is currently a Year 3 BA Visual Communication student at TU Dublin.

Her work strives for visual impact. She draws on the concept behind each project to come up with visual metaphors and let them determine what style each piece will have. Research and experimentation with techniques and materials are paramount to her creative process. Carla creates engaging colour palettes and rhythmic compositions to tell a bigger story and make it memorable.

Some of the themes Carla’s work refers to are resilience and development, climate change and sustainability, and equality.

Carla works as a freelance illustrator and designer and is always looking for the next exciting project.’

Declan Davis is a 2D Animator and illustrator currently based in Co. Kildare. He has worked for Studio Meala on their Animated Special for the Emmy nominated show “Pen15” as well as an unreleased project. He currently works at Daily Madness where he has animated on Turnip and Duck’s show “Critters TV” for RTEjr and is currently animating on an unreleased project for Netflix.

Three pieces of work which Declan is particularly proud of are his traditional animation of his dog Jack (the best boy), his recent personal project “Carrot vs Broccoli” where he combined 2D hand drawn animation with vegetable puppetry, and that time he drew that really, really BIG sandwich.

Bruno F. Silva is a recent graduate of Animation and Visual Media at BCFE. He’s passionate about animation, illustration, concept design and visual development. Throughout his studies in college, he was able to explore  traditional and digital techniques and grow as a multimedia artist. He loves working with rich and graphic colours and contrast between rough and soft. His work aims to achieve a sense of traditional drawing techniques with digital illustration.He’s most excited about sharing his skills,  collaborating with other creatives and coming up with new characters.

We’ve added photos of the event, as well as media coverage, beneath the portfolio work below.