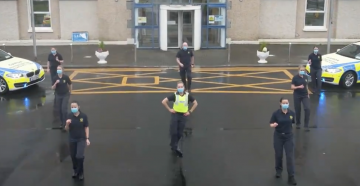 You’ve probably seen the video on social media in the past 24 hours of gardaí in full-uniform dancing their socks off to viral African hit “Jerusalema” in scenic spots around Ireland.

They were responding to a challenge by Swiss police, who took part in the social media trend in early January.

The widely-shared video was filmed and edited by none other than BCFE media graduate Stephen McDonagh.

It’s providing some much-needed light relief from the Covid pandemic and Stephen is delighted with the response.

Stephen completed the two-year HND in Radio Production followed by the BA in Media Production Management in BCFE some years ago and is now the Communications Coordinator of the Press Office of An Garda Siochána.

We look forward to the next instalment.