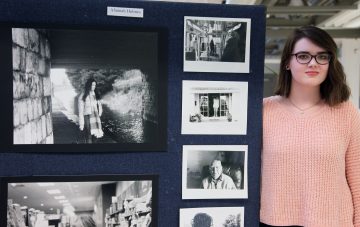 Television and Digital Film held their annual exhibition of photography and short films in Ballyfermot library on Wednesday 18th April. Every student had produced, directed and edited their own individual short film and all students will be going on to further courses in film, television, art and digital media. This year’s prize for the best photograph was awarded to Alannah Holmes (featured): the photograph will be purchased for the college collection.