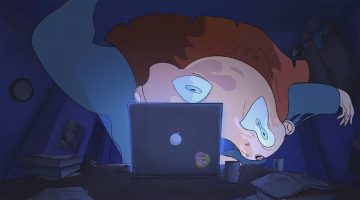 Recent graduates of the Visual Media degree course in Animation were delighted when their undergraduate film won for Best Animated Short at the Royal Television Society Awards Ceremony in Dublin this March. Their film CRTL+ALT+Z has now been nominated for the 2020 RTS overall UK Award for Best Undergraduate Animation. Huge congrats to the team: Conor Leech, Ciara O’Shaughnessy, Kai Munoa, and Director Holly Keating. The events will be live-streamed on the RTS YouTube Channel on June 26th, where the awards will be announced and the films will be screened.