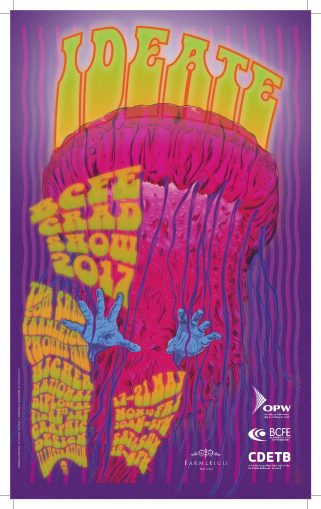 BCFE Graduation Show for our Higher National Diplomas in Fibre Art, Graphic Design and Illustration will take place in the Cow Shed at Farmleigh, Phoenix Park from May 17th – 21st. All are welcome.
Opening times: Mon – Fri 10am – 5pm, Sat & Sun 12pm – 4pm.

“Ideate” the 21st Graduate Design Exhibition of Ballyfermot College of Further Education will take place on May 16th, at The Cowshed, Farmleigh, Phoenix Park at 6.30pm-8pm.

We are delighted to have the award winning Irish illustrator Brian Fitzpatrick, as our guest speaker opening this year’s graduate exhibition. Brian is an illustrator recognised with several important illustration awards: He has collaborated in newspapers and journals: The Wall Street Journal, Johns Hopkins Medicine, The Irish Times and The Boston Globe. His illustrations also appear in advertising and animations. Brian also illustrates and designs Children’s picture books published worldwide. In 2014 Brian was the winner of the International Silent Book Competition at the Bologna Children’s Book Fair in Italy.

This exhibition profiles the work of graduates of three of our Higher National Diploma in Illustration, Fibre Art and Graphics. Students investigate art and design practices through a range of disciplines both traditional and contemporary. Through their education in studio, live projects such as “Off the Cuff” and the exhibition with Illustrators Guild Ireland “Judging by the Cover”,  both hosted by our local Ballyfermot Library.

Our graduates will pursue different pathways- some into advanced entry into further education and others will work freelance within the illustration, graphics and applied arts areas.

Finally, the exhibition will be open for public viewing from May 17th– May 21st– 10am-5pm.