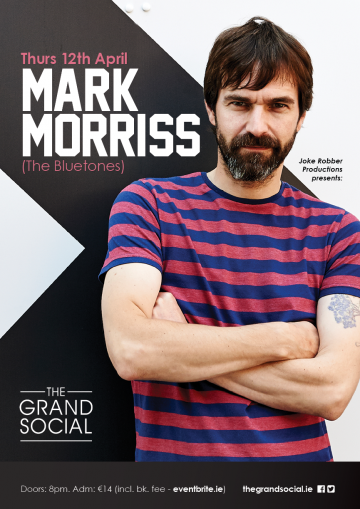 Mark Morriss is a singer songwriter who famously made his name fronting English indie outfit The Bluetones and who had one of the biggest hits of the Britpop years with the classic song “ Slight Return”. Mark fronted the four piece over a successful and fruitful 15 year period, scoring 14 top ten singles and 3 top ten albums, whilst touring the UK, Europe and Japan, before temporarily disbanding in 2011.

Since 2013 Mark has also been a member of Acid Jazz labelmate Matt Berry’s touring band, The Maypoles. In 2015 The Bluetones announced that they would be returning to play a series of anniversary shows, and still tour from time to time. Mark started work on his latest album titled ‘Look Up’, and with an early 2018 release sees Mark return to Dublin for his first Irish show in five years at the grand social on Thursday the 12th of April (see to the left a poster for the event).