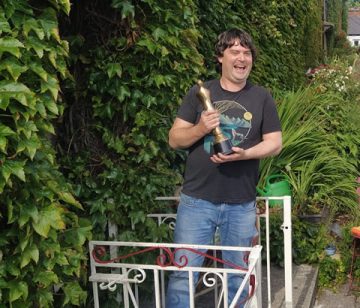 Bray native Aza Hand, made history at last night’s IFTA’s becoming the first person ever to be nominated in both the Best Sound and Best Score categories, an accolade rarely heard of in the industry. Nominated twice in Sound for Son and Here Are The Young Men, he lost out in the category to Lenny Abrahamson’s Normal People, but went on to win big scooping up the award for Best Score for Son.

A peek at Aza’s credits on his IMBD page gives you an idea of just how prolific the sound designer/composer is in the Irish Film industry. Working on everything from Game of Thrones and The Tudors to films such as The Canal, Never Grow Old and most recently Son, a chilling horror directed by Irish Director Ivan Kavanagh. No stranger to the IFTA’s, Aza has been nominated a total of 7 times with 2 wins. He was also awarded a prestigious Golden Reel Award from the Motion Picture Sound Editors Guild in 2012. This particular award holds a special place however.

“This is my first nomination and award for score” he comments beaming ear to ear “It’s actually only my second time writing the music for a film so as you can imagine it makes the win even sweeter!”

Aza explains that he worked on both the sound design and music for Son while under lockdown from his new daughter’s bedroom.

“It was a crazy time. We’d just had our first child and the subject matter of the film was pretty intense. Working on both the sound and music ment really getting into that headspace. I really enjoyed the work but I couldn’t have done it without the support of my partner Kate.”

The Irish Film and Television Awards saw its second year conducting the show virtually with award announcements and speeches pre recorded on Friday. The show then was aired and hosted by Grainne Shoge on Sunday night on Virgin Media.

“All my friends and neighbours were outside my house waiting with champagne as we got the calls from IFTA. So luckily we had something to celebrate!” he laughs.

Aza Hand is currently the staff mixer at EGG Post Productions and continues to work on a variety of productions from all over the world. He is excited to build on his success in composing and we are sure he is one to watch in the years to come! Next stop the Oscars?

Son is due to be released on July 8th exclusively to streaming site Shudder and won the George Byrne Maverick Award for Best Film at the Dublin International Film Festival 2021.