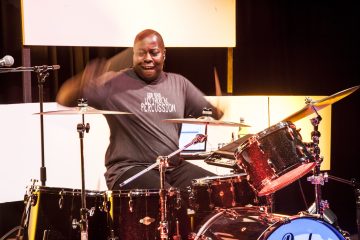 Legendary Drummer, Ralph Rolle (Nile Rodgers, Chic, Sting, Bono, Erykah Badu, John Legend and Paul Simon, to name a small few!) dropped in to give an inspiring workshop to Contemporary Music Performance (Rock School) students during last term. Ralph delighted an enthused audience with details of his distinguished career as a drummer and bandleader in some of the world’s biggest acts.This was Ralph’s second visit to BCFE in as many years and he’s just one of the many exciting industry guests to give workshops in the Rock School over the last 12 months; we look forward to welcoming him back in the near future. Big thank you to our TV department for filming the event also!