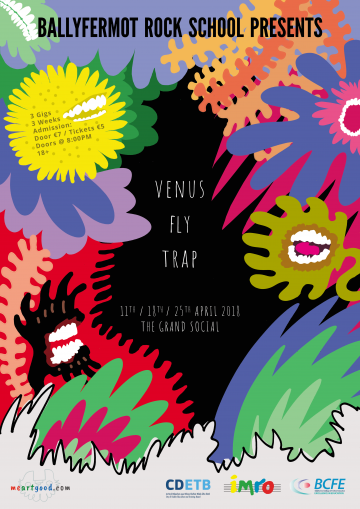 The Rock School BCFE showcase gigs started in 1989 and since then have been held in venues throughout Dublin including Whelans, The Village and now The Grand Social: the idea is to showcase original Irish songwriters. Artists who have benefited hugely from these gigs include Damien Dempsey, Mundy, Wallis Bird, Fiach, Megacone, Junior Brother and many more. The gigs will be filmed to a professional standard by BCFE’s own TV students, giving each artist promotional footage to help them in their career development.

Speaking about this year’s festival, Jennifer Doyle, student at BCFE Rock School said: “it’s a showcase of the Rock School’s most talented performers, with an incredible eclectic mix of styles exhibited by first and second year students. It really is a great opportunity to witness the creativity and talent of Ireland’s best up and coming artists”.

The Rock School at BCFE is the original and most successful Contemporary Music Performance course in Ireland and one of the first of its kind in Europe. It’s aim is to prepare musicians for the professional music industry as writers, performers, instrumentalists, arrangers and producers. Jennifer added: “Between the students and tutors there’s something special about the Rock School that can’t be found in other institutions. There really is a freedom to be creative, and to network within the college with other music and technology students and above all make use of the first class professional facilities.”

With a mini-festival vibe and with music from a wide range of genres, Venus Fly Trap 2018 promises to be an exciting series of gigs with approximately 80 original Irish songs being showcased by original Irish artists over the three nights.