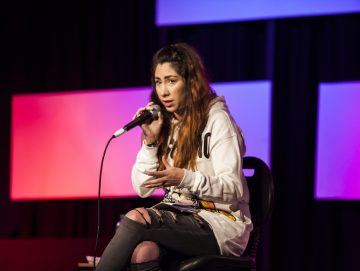 RuthAnne Cunningham gave a Master Class in Songwriting to the Music Department students on Monday 26th November.  RuthAnne has an impressive list of songwriting credits to her name including JoJo’s hit single “Too Little Too Late” which she co-wrote with John Alexander and Billy Steinberg.  In 2007 RuthAnne had songs on three platinum albums in the US and Europe.  Besides Britney and One Direction, she’s written for dance superstar Martin Garrix, UK exports Pixie Lott, Professor Green and Sugababes – the list goes on. She has also co-written half of Niall Horan’s debut album.  RuthAnne gave the students a fresh insight into songwriting and delivered it with style performing three of her songs to a packed ABH Hall.