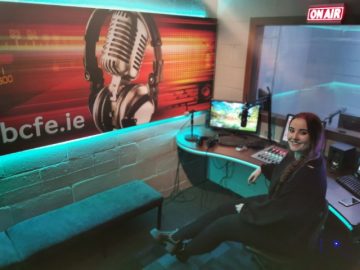 Jessica Maciel returned to BCFE where she graduated in 2018 having done the (MRH) 2 year Radio course and then the Media Management Degree. Jessica has just started working on BBC Radio 1 as a Radio Presenter.

Whilst still on the MRH Radio course Jessica became a Producer on Spin 103.8 and then joined 98FM & Today FM. She told the radio students that the 3 years she spent in the college helped her to open up as a person and meet and network with new people. To great excitement she announced an in-class competition so that Radio students would get to do their own feature on the show she produces, PLAN B on Spin 1038 (see Jessica’s Erasmus+ Radio placement on Spirit FM Finland).