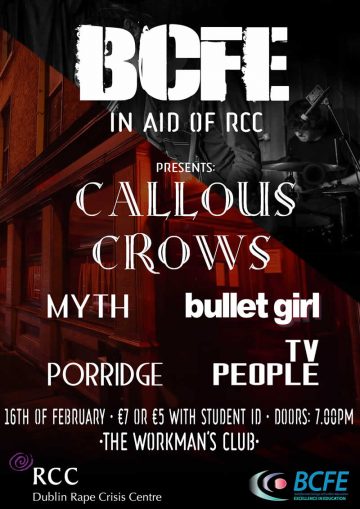 “The iconic Ballyfermot Rock School is hosting a showcase of their most promising talents, headlined by Callous Crows, in benefit of the Dublin Rape Crisis Centre on 16 February. The Rock School Ballyfermot (BCFE) are set to hold a showcase on February 16 at the Workman’s Club in support of the Dublin Rape Crisis Centre. The night will showcase their headline act Callous Crows, an emerging BCFE rock band, alongside Bullet Girl, TV People, Porridge and MYTH”. See our video below:

Promo video for RCC Gig
« Back to all news